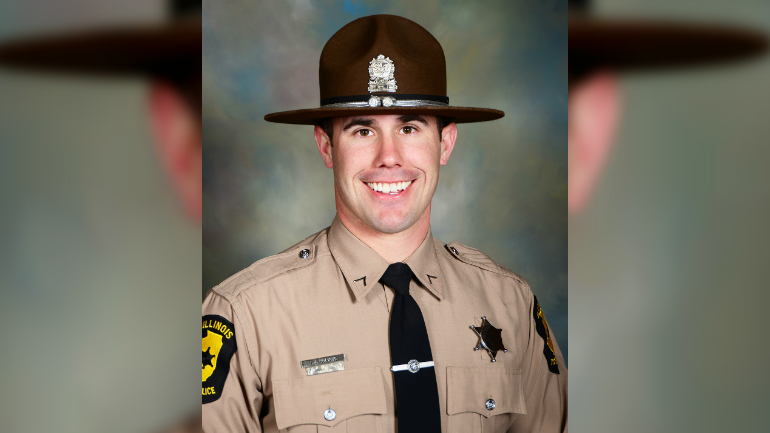 WATERLOO, Ill. – Illinois State Police on Thursday dedicated a section of Highway 3 to honor Private Nicholas Hopkins, who was killed in the line of duty in August 2019.

The Trooper Nick Hopkins Memorial Highway connects Kaskaskia to GG Roads in Waterloo, Illinois. He was a 10-year veteran of the State Police.

“Once someone is gone, you realize how much you miss the little things,” said Whitney Hopkins, the widow of Cavalier Hopkins.

Private Hopkins and other state troopers were executing a search warrant at a home in East St. Louis on the morning of August 23, 2019, when Hopkins was fatally injured. He was 33 years old.

Christopher Grant was convicted of the murder and sentenced to 40 years in prison.

“Nick touched so many lives and it continues to amaze me how many lives are still touched by him,” said Whitney Hopkins.

“We pulled out our ladder truck to honor Nick Hopkins,” said Chief Mike Roediger of the District of Columbia Fire Protection. “He was a valued member of our community in Waterloo and Columbia. His brother is a policeman in our community. We are just here to honor his memory and to honor the state police and our police departments.

The service ended at the church around noon. A steady stream of police cars and other law enforcement officers headed for the stretch of Highway 3 now named after Hopkins.

Waterloo Mayor Tom Smith said it was important to get the dedication for the slain state trooper.

“Nine thousand people will see the sign heading south every day. Twelve thousand at night will pass Nick’s sign, lest we forget,’ he said. “We will always remember Nick Hopkins and that sign – that’s what it’s for.”

Whitney said the sign is recognition of her service to the community.

“Our family will never be the same again, but we are so grateful for the memories we’ve made and the support we receive every day from the people we love,” she said.

2022-04-14
Previous Post: Mariana Lighthouse is a beacon of hope for NMI tourism | Business Section
Next Post: Project I-94 closes section of Kilgore Road in Kalamazoo