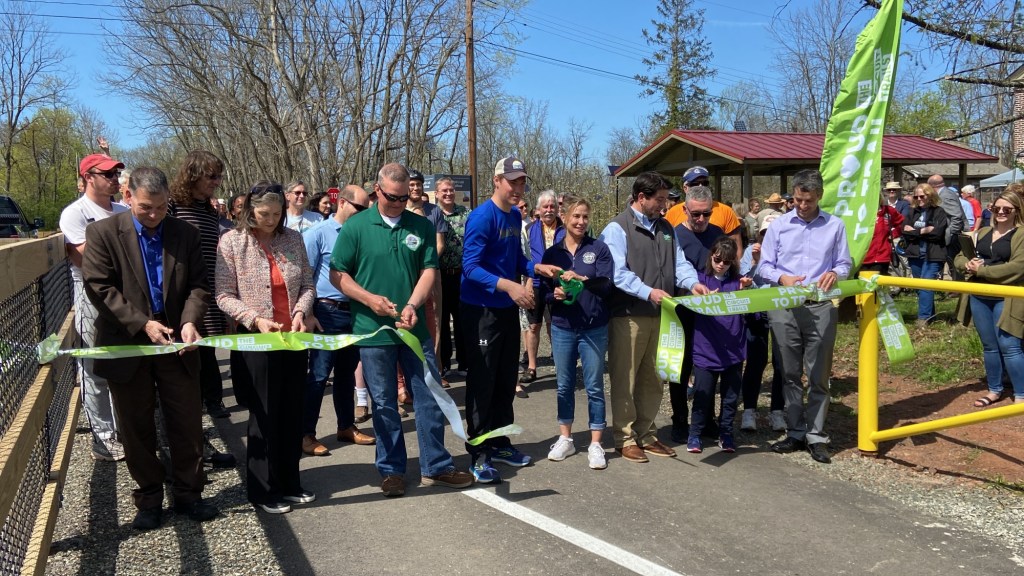 EAST COVENTRY — A new, four-mile, $6 million section of the Schuylkill River Trail officially opened on Earth Day with a flurry of speeches, bike rides and the inevitable ribbon-cutting.

The new section of the trail, which will one day stretch 130 miles from Philadelphia to Schuylkill County, is located between Linfield Road and Fricks Lock Village.

According to Josh Maxwell, vice chairman of the Chester County Board of Commissioners, who was on hand with fellow commissioner, Michelle Kichline, for the ceremony.

“A lot of people think building a trail is easy,” Maxwell told the crowd of about 100 well-wishers and enthusiasts. “But it’s not that easy and we all think it is.”

“The benefits of having trails close to home are many and proven to work,” she said. “Trails provide safe places for physical activity, which can improve mental and physical health.”

“We know ‘build it and they will come’ rings true when it comes to trails like this,” Maxwell said. “Evidence shows that increasing the length and reach of a trail will mean growth in the number of visitors and residents using the trail, as well as the need for additional businesses and services.”

Consider that the Chester County Regional Trail Group already draws 896,000 users a year, he said. When the section to Pottstown finally opens, the Chester County portion of the Schuylkill River Trail will span 12 miles from the bridge connecting Mount Clare and Phoenixville to the Route 422 bridge bringing the trail back over the river into the county. from Montgomery, through Pottstown and West Pottsgrove. and over Berks County.

“It was a huge lift,” Sarah Clark Stuart, executive director of the Bicycle Coalition of Greater Philadelphia, said of the completion of this section of trail, adding “particularly regarding a certain railroad that I won’t name. not here”.

Each section of trail completed expands the network that connects southeastern Pennsylvania, Delaware and southern New Jersey, a network promoted by the Circuit Trails Coalition. “The real power of these trails is that they connect communities,” Stuart said.

They also improve the value of nearby real estate, noted Mike Walsh, assistant secretary for the Pennsylvania Department of Conservation and Natural Resources, which provided some of the funding for the trail. Walsh said he remembers growing up in Chester County in the 1980s when the concept of preserving open spaces was being promoted.

“Some people were against the idea of ​​having trails near their homes for fear of what they might bring, now real estate listings favor being close to a trail or a park,” he said. he declares.

In total, Pennsylvania has 12,000 miles of trails and has budgeted $70 million for their construction and maintenance, Walsh said. That investment has paid off in Pennsylvania, which is the nation’s sixth-largest outdoor recreation state, he said.

But there is more to do. There are still 121 trail gaps around the state, Walsh said — well, there are only 120 now.

East Coventry Township Supervisors chairman Ray Kolb said he was particularly pleased with this trailhead as it makes it easier to view the historic village of Fricks Lock, from which the trailhead is named.

As its name suggests, it was a village that thrived around one of the Schuylkill Navigation Locks, a series of canals and locks that paralleled the Schuylkill River and was the county’s primary means of transporting coal from Schuylkill to the Philadelphia factories that helped fuel the Industrial Revolution.

This system, useless in winter when its canals froze over, was superseded by the rise of the railways and many of the buildings at Fricks Lock fell into disrepair. The entire village was purchased by PECO during the construction of the Limerick Central Nuclear Power Station due to its proximity to the power station directly across the river.

It has since been partially restored and the East Coventry Historical Society is now licensed to run tours of the village on Saturdays.

“It becomes a nice place to stop and learn about this piece of history,” Kolb told the gathering.

Efforts are also being made to improve exploration of tours of the historic area and buildings at the Linfield Road trailhead.

It’s the kind of destination Steve Trobovic, 84, said he likes to take. The King of Prussia’s resident was present on Friday with his daughter-in-law, Kathleen Trobovic. “We just went up to see the new pedestrian bridge over Route 724,” he said of one of the trail’s newest additions just south of Birdsboro.

“And we should stop here,” he said matter-of-factly.

The two then headed down the trail, join officials and visitors who have started checking the newly opened section of the trail for the first time.