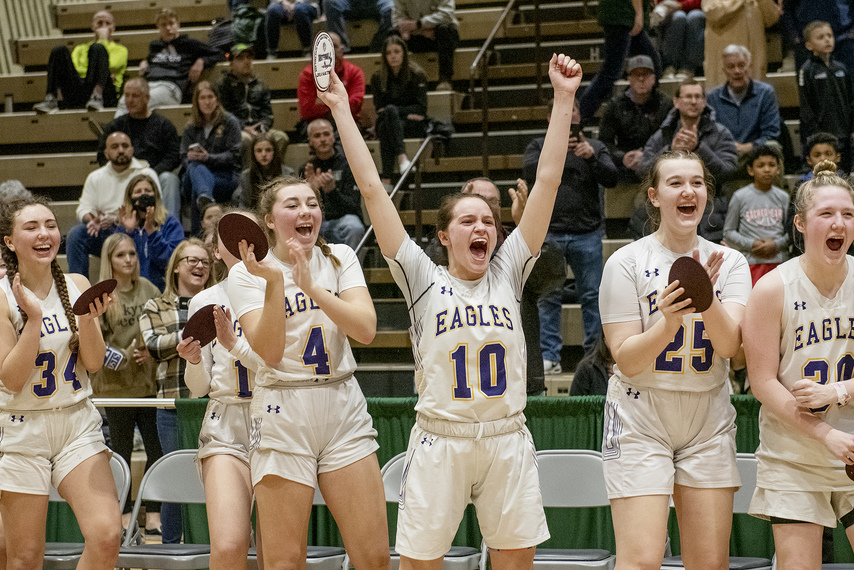 TROY — Duanesburg thought he could score against Greenwich in Saturday’s Division II Class C women’s basketball game if he could get in a position to do so.

Greenwich, after all, had used their pressure defense as a primary weapon to reach the title game with 23 straight wins.

“All credit to the coach [Chris Herron]said Duanesburg sophomore Allison O’Hanlon. “We watched the movie and saw how they played in defense. We were prepared.

Duanesburg beat this press early and often until Greenwich called it off, and by then the tournament’s top-ranked side had a substantial first-half lead which they won 64-47 at Hudson Valley Community College.

O’Hanlon scored a game-high 26 points in the Eagles’ first league win, and tournament MVP Madison Meyer – the only senior to start the game for either team – had 19 of 8 points for 10 shooting with five assists. .

“I wanted to leave a legacy,” Meyer said after the game in which the Eagles never hung. “I’ve been thinking about it since third grade.”

Duanesburg (22-2) beat each of its four playoff opponents by double digits, including a group of Greenwich (23-1) who also won the title game.

“That’s pretty cool,” Duanesburg coach Chris Herron said after his No. 2-ranked team in the state topped New York’s No. 4-ranked contingent. “But it hasn’t sunk yet. I’m not sure it clicked with the girls either.

“We worked so hard every day,” said O’Hanlon, who joined Greenwich’s Brooke Kuzmich and Norah Niesz, Bern-Knox-Westerlo’s Alexis Wright and Corinth’s Emily Dingmon in the all-tournament squad. “It finally happened.”

The quick start certainly helped, as Duanesburg took a 17-7 lead after the first quarter and led 32-16 at intermission. O’Hanlon had 13 points at the break and Meyer had 11.

“It was massive,” Herron said of the Eagles lead that was partly a byproduct of smart passing on the Greenwich press. “We looked at their scores and they hadn’t jumped on it. We wanted to freak them out. It was the best case scenario for us. »

Greenwich lost Adrianna Rojas to a knee injury in the first quarter which took away a key part of their pressure package.

“Our defense has been everything all year,” Greenwich coach Jason Slater said. “You lose your best defender in the first few minutes, it takes a bit of your momentum.”

O’Hanlon gave Duanesburg its first double-digit lead at 12-2 when it sank three free throws with just under four minutes left in the first quarter. The second also gave Duanesburg their first 20-point advantage at 30-10 in the final two minutes of the half with two more on the line.

“We knew we had to beat their pressure if we were going to win the game,” Meyer said. “We ended up getting them out of there.”

Meyer had three layups as part of a 13-0 second-quarter streak after the Eagles went 10-0 in the first quarter that included O’Hanlon’s first eight points.

Duanesburg started four sophomores, including Alex Moses, who had eight points and five assists; Hannah Mulhern, who had six points and a game-leading 10 boards; and Lauren Capron, who had six rebounds and kicked it 10-0, the first quarter and a layup.

“We set goals,” Herron said. “When this Grade 10 class was in sixth grade, we were talking about winning a Section II championship. Add the senior class with their leadership, and it made everyone better.

Second-seeded Greenwich applied the pressure again in the fourth quarter and went 12 times closer at 53-41 on a Cate Abate layup and 55-43 on two Niesz free throws. Duanesburg responded with nine straight points, a run that started with a layup and a 3 by O’Hanlon.

“They had a little comeback and we had to rally,” Meyer said.

Kuzmich scored nine of 16 points in the fourth quarter as Greenwich pared the 46-28 lead Duanesburg had established after three periods. Niesz had 14 points and Abate finished with 10.

Duanesburg will face the winner of the sub-region between Northern Adirondack of Section VII and Madrid-Waddington of Section X in a Class C regional final next Saturday at the HVCC at a time to be determined.

“From the start of the year, our goal has been that we want to win,” O’Hanlon said of what lies ahead for the Eagles. “We respect everyone, but at the same time we believe in ourselves.”

More from The Daily Gazette: