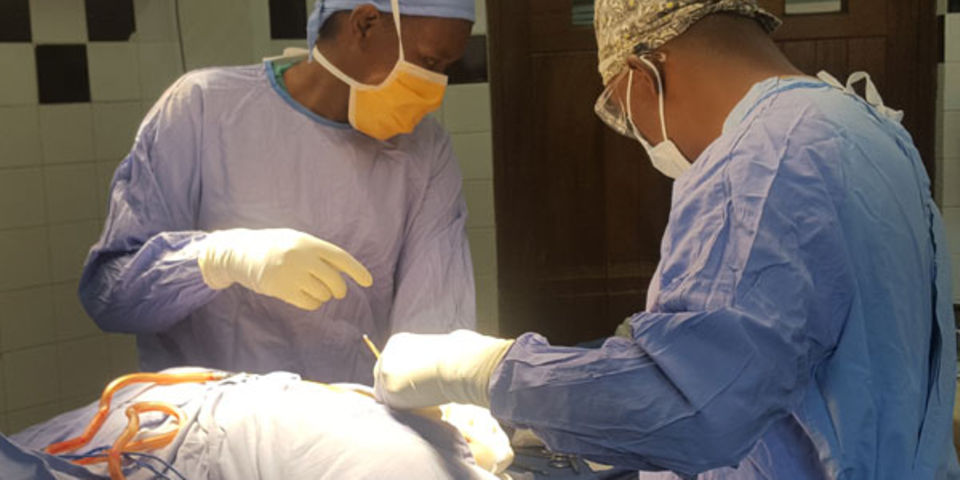 Cesarean section: why and what to expect

A caesarean section is a surgical way to deliver a baby that opens up the mother’s abdomen and uterus. It is also known as a cesarean birth. Although some women are certain in advance that they will have a C-section for different reasons, you may plan a vaginal birth only to find that your plan needs to change.

While the elective caesarean can be planned at the request of the mother, Dr Wasswa says it can also be planned for medical reasons. For example, in cases where the medical team knows that the mother cannot deliver safely.

According to Dr. Wasswa, “It is a procedure performed under sterile conditions, so it must be performed in an operating theater, with clean instruments.

“An incision is made from the abdomen to the uterus, which is also opened to remove the baby,” shares Dr Wasswa, adding that two types of incisions are used.

“One is vertical and the other is commonly referred to as a bikini line or a transverse incision,” he says.

According to webmed.com, vertical incisions are common in emergency C-sections because they are faster. Although this cut makes it easier to access the baby, it is said to be more painful and take longer to heal. In contrast, the horizontal incision is common with elective caesareans. It is preferred by most mothers because it is easier to hide, heals faster and causes less pain.

There are indications and reasons why a caesarean section is performed. Dr. Herbert Ozelle, gynecologist, explains that these are classified into maternal and fetal reasons.

“When not well managed, the mother is in danger and the baby has to be delivered earlier. However, that doesn’t necessarily mean that if a mother has one of these conditions, she can’t have a vaginal birth,” he says.

Pelvis problems: When the pelvis is not wide enough to allow passage of the baby, a caesarean section is the only option. Previously, doctors performed measurements to try to assess whether a woman’s pelvis was adequate enough for the baby to pass through.

“Today we allow the mother to go into labor and assess her progress. For example, if the cervix is ​​opening and if decency is going well. In cases where the pelvis does not does not allow progress, a caesarean section is performed,” explains Dr. Ozelle.

Malposition: The baby is supposed to come out head first. However, there are cases where a baby has an abnormal presentation, such as with the buttocks or one arm. While a mother can have a breech birth where the buttocks come out first, there are several risks such as the baby’s head getting stuck which can lead to death.

Big baby: Dr Ozelle says that a baby who weighs more than 4.5 kg must be delivered by cesarean section because he cannot pass through the pelvis. “If they do, several complications can arise, such as injuries to the mother’s perineum, fractures to the baby, especially in the collarbone, and peripheral nerve damage,” says Dr. Ozelle.

Non-reassuring fetal status: Most people call it fetal distress and there are many reasons for these complications. Sometimes the baby’s heart rate is very low or very high (normal heart rate is between 110 and 160).

“There are certain reasons for causing a variation in heart rate, but if they are not resolved, a cesarean section is the only way out,” he says.

Bleeding during labor is not good and problems such as the placenta abruption earlier than expected can be the cause. This can cause bleeding that requires a caesarean section.

Also, if the baby poops in the amniotic fluid, it is an indication that he is not well, which requires an emergency cesarean section.

Bad progress: The labor is expected to last a certain length of time although sometimes it is slow. There are several reasons for this, such as the baby being large, being poorly positioned or the mother not having good contractions.

“With the latter, we give drugs to make the contractions stronger. However, if that fails, a caesarean section is performed,” says Dr. Ozelle. He adds that there are cases where a cesarean section is not necessary, for example when the umbilical cord is around the baby’s neck.

Many women want to have a caesarean because they don’t want to go through the pain of labor. That said, says Dr. Ozelle, there are several ways to control pain during labor.

“That’s why a patient should have a discussion with her gynecologist about pain and other concerns so that when she experiences excessive pain during labor, her preferred method is used,” he advises, adding that You also have to be careful about the other effects that come with having a caesarean section. For example, failure to care for a surgical area could lead to infection. Some of the signs include a high temperature, so fever, pus from the incision, and pain at the site. If you notice any of these symptoms, see a doctor.

The vertical and horizontal incisions involve the cutting of nerves in the abdomen. Normally, when a woman heals, she may feel numbness around her abdominal area, although this will go away over time. However, there are cases when the numbness persists, causing the woman to experience sharp pain in the abdomen and legs. Here, one should consult a doctor immediately.

A scar will obviously form after the C-section. However, in some cases, this scar becomes red, thick and raised. Although not bothersome, it can cause irritation when the fabric rubs on it. The extra tissue on the scar is also bad, which affects self-esteem.

That said, Dr. Wasswa says, most of the time, a C-section is a safe procedure that has saved many mothers and babies from death. “The only challenge is the fine line in making the decision between predicting that the mother can successfully deliver the baby normally versus a C-section,” he says.