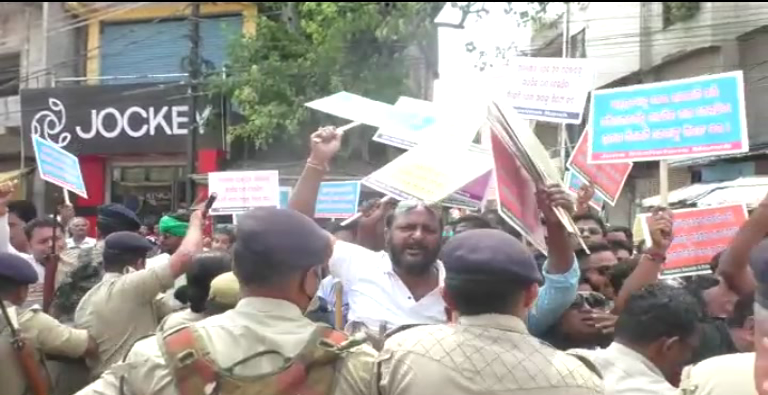 Jharsuguda: BJP and BJD members clashed today in the city of Jharsuguda over the ‘mysterious’ death of Health Minister Naba Kishore Das despite the blocking of Article 144 as part of the precautionary measures taken by the local administration.

The district police administration had enforced the Section 144 order of Jharsuguda Police Station, Jhanda Chhak in Dharmasala Chhak prohibiting gatherings and demonstrations in the morning. However, the BJD and BJP stormed Jhanda Chhak brandishing slogans.

The precautionary measure was taken after BJD and BJP announced separate protests for today.

According to reports, the district BJP today notified Gherao Jharsuguda Police Station of the “suicide” of Lalit Sahu, who worked as a cook at the residence of Health Minister Naba Das. In a counter-effort, the BJD had announced that it was organizing a demonstration demanding a fair investigation based on a complaint filed by the father of the deceased youth against the BJP leaders.

In view of the public order situations, the district administration has issued restraining orders under Article 144 of the Code of Criminal Procedure (CrPC) for the aforementioned location.

Despite the banning orders, the two political parties took to the streets of Jhanda Chhak and clashed. Police arrested several protesters from both parties.

Lalit Kumar Sahu, 22, a resident of Bilimi village in Dhenkanal district, was found hanging with a towel in the staff quarters of Health Minister Naba Das’ residence on the evening of April 17. The body was seized by Jharsuguda town police and an autopsy was performed the same evening before being handed over to the family.

Sensing a big conspiracy behind the ‘mysterious’ death of the cook, the opposition BJP has demanded an investigation into the role of the minister and the local administration. The party alleged that the death may have been murder.

In two separate press conferences, BJP Secretary of State Tankadhar Tripathy and Chief Anjali Behera raised suspicions about the way the autopsy was carried out in the evening.

“As per government guidelines, the autopsy cannot be performed after 5 p.m. except in an emergency. What was the situation in which the autopsy was performed in the evening and the body was released to the family of the person who died the same evening and was cremated at night,” Tripathy asked.

He demanded a high-level investigation into why post-mortem guidelines were not followed in the case of Cook’s death.

With the BJP targeting Naba Das in the case, BJD came forward in his defense, saying the death was an “unfortunate” incident.

“The investigation is ongoing in accordance with the law and the opposition should await the completion of the investigation,” Jharsuguda Town BJD Chairman Sandeep Awasthy said.

Meanwhile, Jharsuguda Police recovered Lalit Sahu’s mobile phone and sent it for forensic investigation. The deceased’s call records revealed that he had approached his friends for financial assistance.

Police sources said that a transaction of over Rs 6 lakh was made from his account in the month of April. He had also borrowed money from his brother and father on several occasions during the period.

It is also suspected that Lalit might be betting on IPL matches lately and his suicide might have been the result of huge financial losses.