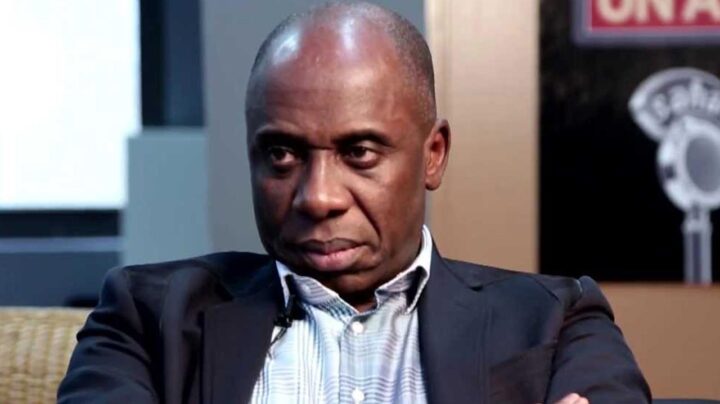 Since Rotimi Amaechi, Minister of Transport, declared his intention to run for the presidency in 2023, concerns have been raised about his retention in power.

Saturday, the Minister officially announced his desire to run for the highest office in the country, putting to rest speculation about his presidential ambition.

“I stand before you today to declare my intention and submit my candidacy to become your next president,” Amaechi told members of the All Progressives Congress (APC) at an event in Rivers State.

“My aspiration is not to achieve a personal ambition. I am running for office because I believe it is my moral duty to give what I can in the service of my country.

Being the first political candidate nominated by President Muhammadu Buhari to declare his candidacy for the presidency, the development has drawn mixed reactions from Nigerians, with some calling for his immediate resignation as minister.

On Sunday, a group known as the Niger Delta Transparency, Accountability and Good Governance Group (Niger Delta GAT) said the minister should have resigned before declaring his presidential candidacy.

“It is rather regrettable that due process was not followed by the minister and I hope President Muhammadu Buhari will ask him to step down immediately,” the group said.

“Anyway, the right thing to do now is for him to resign immediately to pursue his dream. Remaining as a minister while pursuing his presidential ambition will be a huge distraction for the government. The transport sector is in very bad shape, and it should suffer more with a presidential aspirant to the post of minister.

“Besides being immoral and unethical with the conflict of interest that comes with it, it is also illegal for him to pursue the presidential candidacy while serving as a minister.”

WHAT DOES THE ELECTION LAW SAY?

The Electoral Act 2022 prohibits elected politicians from voting or being elected at a political party convention or congress for the purpose of nominating candidates for any election.

Section 84(12) states that “No political appointee at any level shall be a voting delegate or be elected to a convention or congress of a political party for the purpose of nominating candidates for election “.

While Article 29(1) of the law obliges political parties to submit names of candidates no later than 180 days before the election.

After Buhari approved the electoral law in February, the Independent National Electoral Commission (INEC) updated the calendar of activities for the general elections, giving political parties between April 4 and June 3, 2022, to hold primaries. .

The APC has yet to announce the date of its convention to elect a presidential candidate to represent the party in the 2023 elections.

Accordingly, under Articles 84(12) and 29(12) of the Electoral Law, political candidates running for office will have to resign by June 3 – the date by which INEC expects all problems with the party primaries have been resolved.

“AMAECHI DID NOT VIOLATE THE LAW”

Michael Agada, senior program officer (elections) at Youth Initiative for Advocacy, Growth and Advancement (YIAGA), told TheCable that the minister did not breach any provisions of the constitution or election law with respect to political appointments.

Agada said those calling for Amaechi’s resignation should be impartial on the issue rather than emotional.

“When people say that, I want them to quote the section of the law that was broken. I’d rather watch what the law says than be sentimental,” he said.

“By law, he should resign before the APC convention to elect a presidential candidate. The law does not mention the number of days. As long as it’s before the convention, it’s within his rights to do so. So as it stands, I don’t see any part of the law that he broke, whether it was the constitution or the election law because the convention didn’t happen. And as far as I know, he did not vote as a delegate at the last convention to select party leaders.

Presenting a legal perspective on the issue, Modibbo Bakari, a constitutional lawyer, said Amaechi had the right to remain in office until voting at the convention begins.

“He didn’t break the law because indicating his interest in running for office is different,” he said.

“The electoral law says you can’t be elected and you can’t vote, that’s what the article says. The voting period therefore did not reach Amaechi at the office.

“According to the provisions of the law, he can even resign a day before the election. What you have to see is that when he is elected, he does not occupy this position. He can therefore continue his nomination until the day of the election if there is no other internal procedure of the party.

“If it is based on the electoral act, he can hold the position until the day before the election provided that on the day they vote for him he is not in that seat – it is a simple truth. He can even take the job and resign in the morning and they vote for him in the evening.

“Resigning is a question of morality”

In addition to not breaking the law, Agada said morality and integrity require that any political appointee resign before declaring that they are contesting elected office.

“Calling him (Amaechi) to step down is just more of a moral thing to do. He says ethical standards require him to step down,” he said.

“Most state governments are already pleading with their elected politicians to step down if they want to participate.

“Why it’s moral and ethical for him to step down is because campaigns are going to start anytime. You want to make sure he’s not using his office stakes to campaign for something else. As a As a minister, he is entitled to official cars and security details, so rather than being busy with his duties, you use these things to campaign.

“But apart from what the law says, people with such ambition should quit. Abuse of power and political appointment is just a thin line because when you use your office device for political campaign or personal gain it is a violation of the constitution.

“So I would expect a minister who has political ambition to resign. It’s an ethical thing to do. A minister should not let his personal interest interfere with his duty.

Although the judiciary has yet to issue a final decision on the controversial section 84(12), the National Assembly appealed against a judgment deleting the clause.

Bakari said the ruling party should play it safe by fully complying with the provisions of the law to avoid a repeat of the Zamfara case.