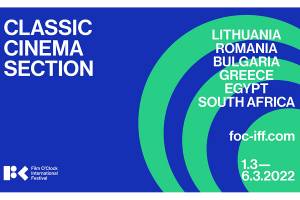 One of the Festival’s missions is to present classic films from the six participating countries: Lithuania, Romania, Bulgaria, Greece, Egypt and South Africa, precious productions that have stood the test of time. The festival thus offers film lovers the opportunity to broaden their cultural horizons, considering that it is an excellent way to take a look at another era and at the evolution of society in terms of style, themes and even general cultural values.

Tickets and festival passes for the second edition of the International Film O’Clock Festival, which will take place from March 1 to 6 at the Muzeul Ţăranului Cinema in Bucharest, are available on the Eventbook platform.

The six classics of this year’s International Film O’Clock Festival are powerful and innovative films that attracted attention and even shock in their time, and which, for this reason, were either viewed with skepticism or even banned in a first time :

The selection of films was made by the festival committee composed of Mirona Radu (director, producer, Romania), Andrew Mohsen (film critic, director of the artistic office of the Cairo Film Festival) and Dian Weys (director, screenwriter, South Africa ).

Devil’s Bride, directed by Arūnas Žebriūnas, is one of the most successful Lithuanian films. Choosing the form of a musical, a rock opera, the author remained very close to the book from which the film was inspired – “Whitehorn Mill” by Kazis Boruta, but at the same time created an original cinematographic opera. A film full of expressiveness, but also modern, with an action that follows the melodic line created by Viaceslav Ganelin in a fun and relaxed way.

The film follows the story of a demon – Pinciukas – who comes to earth near the mill of Baltaragis. Pinciukas and Baltaragis conclude a pact: the devil will help the owner of the mill to marry a very beautiful woman, Marcele. Instead, the miller will give the devil the daughter he and his wife will have as his wife. After the baby is born, Marcele dies. His daughter, Jurga (role played by the actress who also played the role of the mother) will become a very beautiful woman and the young Girdvainis will fall in love with her. The devil does all sorts of maneuvers to separate Jurga and Girdvainis, and Jurga’s father, the miller, ends up regretting the pact with the devil and wants to persuade him to marry his sister, Ursule, who is much uglier.

Often compared to “Jesus Christ Superstar”, the film is probably the most original musical of the Baltic countries and the most successful film of Lithuanian cinema during the Soviet period.

In 2018, the original print of the film was restored. Thanks to the kindness of the National Center of Cinematography of Lithuania, the International Film O’Clock Festival is happy to present this copy to the public of Romania, but also of the other countries participating in the Festival.

The classic Romanian film of this edition is a documentary, “Water like a black buffalo”, which describes the devastating flood disaster of the spring of 1970 and which is known as a film-manifesto, bringing an aesthetic and ethical attitude associated with a new generation of filmmakers, called the generation of the 70s.

Dan Piţa confessed that: “…we didn’t have an initial script. We only had the event. First we filmed in Brăila, then we went to Transylvania, to Sighişoara. The talented operators Demian, Tănase, Mărgineanu, Marinescu were filmed at our request, sometimes “blind”, without aiming, depending on what we told them. That’s how we filmed the beginning and the recovery of the soldier drowned, and other things too. We were inventing a cinema that we had never done before”.

The film can be considered as a manifesto because it was born from the need of its creators to testify, by the specific means of the film, in connection with a devastating event. “Water like a black buffalo” was also recently remastered.

On March 3, also celebrating Bulgaria’s National Day, the International Film O’Clock Festival presents film lovers with one of the films created by the first Bulgarian filmmakers to create fiction films – Binka Zhelyazkova – a 1967 production by “The Tied-Up Balloon”, directed from a screenplay inspired by a short story of the same name. Blinka Jeliazkova directed this film after five years of absence from Bulgarian cinema, having been banished by the bureaucratic apparatus because of her first films.

“The Tied-Up Balloon” is a film based on a true story. A World War II military balloon reached the skies of a Bulgarian village. The villagers decided to dismantle it to make clothes from the silky material of the balloon. The pursuit of the ball gives rise to tragicomic situations. Gradually, the villagers forget the original intention of chasing the ball, they also forget the quarrel with the people of the neighboring village who also wanted the ball and evolve in this ball chasing. Finally, the balloon falls to the ground, the soldiers come to recover it then the villagers, in order to save the balloon, raise it again. But instead of leaving, the balloon turns around and attacks the soldiers.

“The Tied Up Balloon” is a modern film, a complex mixture of comedy and tragedy, full of colorful characters and situations that highlight the character of Bulgarians. The film is a rebellion against the standards of socialist art, a creation full of metaphors, with a magical and realistic ending.

Despite its success, the Bulgarian cinema of those years did not allow the film to participate in the Venice Film Festival, where it was invited, only allowed the film to shoot in theaters for a few days, and then it was banned for over 20 years. for years. It was not until 1989 that the film was screened at the Berlin International Film Festival.

The festival presents to the public the first film of the most respected Greek director of his country – Pantelis Voulgaris, a director who has the reputation of being a keen observer of the psychological changes of everyday life, “Anna’s Engagement”. Much of the film’s action takes place in the courtyard of a middle-class family in suburban Athens, where the family gathers for Miss Anna’s first meeting with her suitor. Little by little, their posture and their pretensions give way to hypocrisy and condescension beyond the altruistic mask. In contrast, Anna is the poor village girl who has been “adopted” by her family’s grandmother and is presented as a pillar of seriousness and modest strength. The film’s atmosphere turns dark after Anna and the groom-to-be spend a night on the town, and the family suspects the worst and asks her to stay a spinster in the house. Voulgaris shows the anxiety of Anna, who must choose between her happiness and the needs of the two families. Anna’s choice is an accusation against the social system where a simple girl is like a sacrificial lamb.

Wedad Mitry has been a journalist all his life. An activist since she was a student, she was the only woman elected in 1951 to the Cairo University Students’ Union. The same year, she joined the Women’s Popular Resistance Committee. Safinaz Kazem, journalist, theater critic and writer, is the author of numerous books. In the 1960s, she was a student in the United States – in Kansas, Chicago and New York. Shahenda Maklad distinguished herself in the student and nationalist movements, participating in parliamentary campaigns. She continues the fierce struggle for peasant rights and other populist causes. Amina Rachid is a convinced leftist; she was born into the old upper class. She completed her studies in Paris, where she worked for the Association of Arab Students of France and worked for several years at the National Center for Scientific Research. Her political commitment brought her back to Egypt, where she taught French literature at Cairo University.

“Four Women of Egypt” is more than a film. The four women talk animatedly about the nation, politics, culture and Islam. They make connections between past and present politics and ideologies and their own experience. The women saturate their conversations with humor and irony, speaking with invigorating candor and harsh honesty, while analyzing the past and living in the present.

From South Africa, the Film O’Clock International Festival presents a 1959 film written, produced and directed by Lionel Rogosin. The film had a profound impact on African cinema and is considered a living document of the heritage of South African cities of the 1950s. The film is a reportage, a documentary, a historical film and a political film, because the people and events presented are real.

“Come Back, Africa” ​​is a story about the experiences of black South Africans. Rogosin’s aim was to expose the harshness and injustice of apartheid. Desperate to support his family, Zachariah, a young Zulu, leaves his village starving and travels to Johannesburg to work in the gold mines. He settles in a city dominated by apartheid and is hit by numerous prohibitions which restrict all movement. Zachariah can’t be hired without a license, but he can’t get a license if he isn’t hired. He does all kinds of work, is ridiculed, insulted, ostracized and finally arrested. All of Zachariah’s feelings are aimed at rekindling the anger of indigenous South Africans who had no rights and were forced to survive by obeying unwritten racial rules as their families disintegrated.

Whether it’s documentaries, comedy musicals or fictional films inspired by harsh reality, the screenings of the International Film O’Clock Festival this year offer an in-depth analysis of society and the problems it has known and maybe still.

In addition, the festival organizes on Wednesday, March 2, from 5:00 p.m. to 6:30 p.m., an online debate on the possibilities of collaboration and mutual support in the presentation of classic films, on the opportunities and the difficulties encountered by those who try to attract the public towards the classic film. Participation is free, by booking on this link: https://bit.ly/3oyEi8u

The festival is an annual, competitive and non-specialized event, and the second edition of the festival is organized and produced by Creatrix Fama and the ABI Foundation.