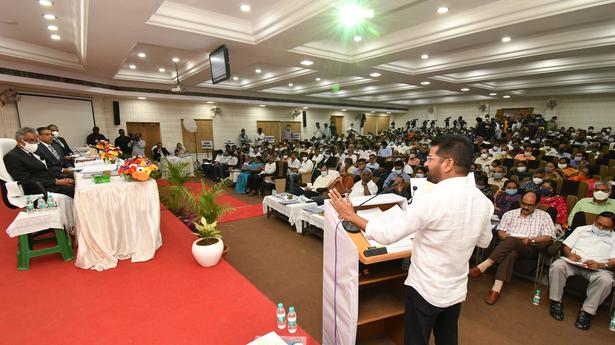 A cross section of stakeholders strongly opposed the ₹6,831 crore hike in retail supply tariff proposed by the two electricity distribution companies (Discoms) in the state for 2022-23 and blamed the state government for the current status of both utilities being in huge operational losses.

A public hearing, the last of four scheduled by the Telangana State Electricity Regulatory Commission (TSERC), was held here on Friday with Regulator Chairman T. Sriranga Rao presiding over the event in the presence of two other members of the Commission and officials from Southern Power Distribution Company of Telangana Ltd (TSSPDCL) headed by its Chairman and Managing Director G. Raghuma Reddy in addition to a cross section of all categories of consumers and different organisations.

Leading the stakeholders opposing the proposed tariff hike, Telangana Pradesh Congress Committee (TPCC) Chairman A. Revanth Reddy said the losses of two Discoms had fallen to around ₹2,000 crore as of September 30 2015 after joining Ujjwal Discom Assurance Yojana (UDAY) scheme in January 2017. However, the state government’s inability to fully reimburse Discoms against subsidies given to different sections of consumers by the government had driven up their cumulative losses (debt) at around ₹60,000 crore now, he alleged.

He asked the Commission to seize the properties of the state government as he had become one of the major defaulters of the two Discoms with nearly ₹10,000 crore due to be paid to utilities till the end of December 2021 and also avoiding huge subsidies. Against the requirement of a subsidy of around ₹16,000 crore, the government had made a budget provision of less than ₹6,000 crore per year, he pointed out.

Further, he alleged that the overall 18% tariff hike proposed by Discoms would directly burden people over ₹6,830 crore, but coupled with an indirect hike in the form of various fees and taxes, the total burden would go beyond ₹10,000 crore, he said. . Despite all the lofty claims of the Telangana State Government being at the top of the electricity sector, the Southern Discom was in 23 rd position and Northern Discom was in 33 rd position out of a total of 41 Discoms in the country.

The head of the Center for Power Studies, Mr. Venugopala Rao, said that although Discoms offered a hike of ₹0.50 per unit to low voltage (LT) consumers and ₹1 per unit to high voltage (HV) consumers in addition to the proposed increase in fixed, consumption and minimum charges, but they did not justify the increase. He also objected to Discoms’ argument that the fixed charge increase was intended to relieve Discoms from incurring losses and inquired why the same logic was not applied for the LT agricultural grade.

He asked the Board to establish a full cost tariff for the LT agricultural class and to order the Discoms to obtain the full amount of the subsidy for the 24×7 free electricity supplied to the class.

Representatives of several industry and trade bodies, chambers of commerce, non-governmental organizations, grassroots organizations and individuals also opposed the tariff hike. The South Indian Cement Manufacturers Association argued that instead of increasing, the tariff could be reduced.

2022-02-25
Previous Post: Radke delivers for Lourdes, Eagles advance to sectional semis – Reuters Sports News
Next Post: Metro operations will be curtailed on the Yellow Line section on Sunday due to maintenance work